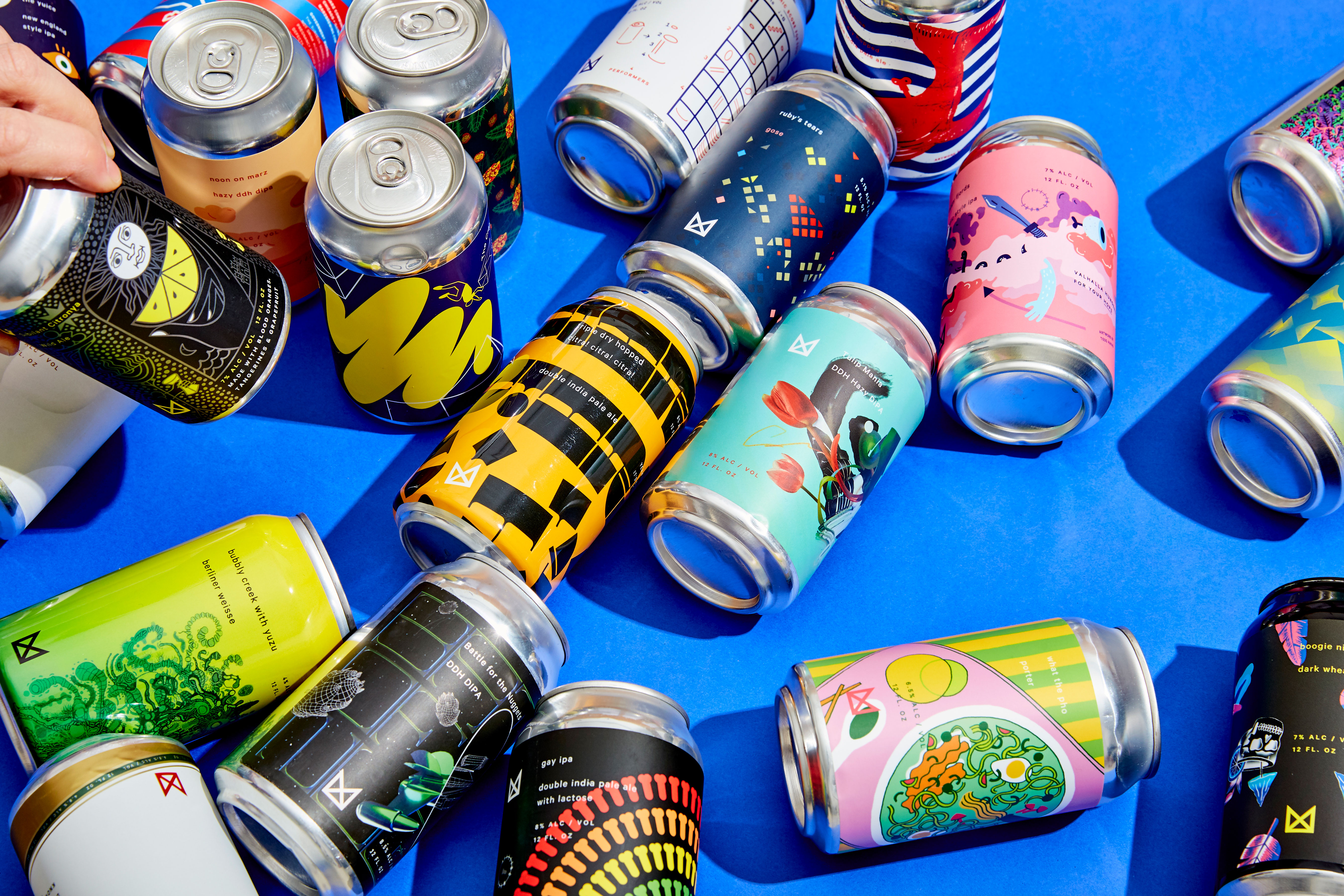 We became fast friends with Michael Freimuth—Franklyn’s co-founder and creative director—after founding Grammar and have a deep appreciation for Franklyn’s work. Michael’s artful approach to the design of brand experiences results in truly unique work, and since it often sits at the intersection of art and design, we were eager to chat with him about his influences and inspiration. Enjoy!
—
Can you tell us a bit about you—where you come from and how you got here?
My parents left England in their twenties, which I suppose makes me a first generation American “Freimuth.” We grew up in the suburbs of Chicago, but stayed in close touch with my family in Europe.

It turns out both of my grandfathers were creative in different ways, and though my parents had a touch of it, I’m the one that got to take more advantage of our recessive creative genes. My dad’s father inherited the family business in Czechoslovakia as a textile maker before World War II—however after the war became an entrepreneur out of necessity and a fashion-designer out of curiosity, from what I can tell. I’ve actually been collecting garments from his brand on ebay (from the 1940’s to the 1970’s) as a way to stay in touch with what he built—interestingly his logomark still looks hot and about 30 years ahead of its time. On the other side, my mom’s father worked for the British government and was a codebreaker during the War, but also managed to draw beautiful and charming children’s books on the side. I still have two that he made for me, and they are absolute treasures.

I like to think I inherited a touch of the left and right brain from each of them, but being a creative person is in my family.
How did you discover art? Was there a moment or event that set you on this path?
I doodled as a kid, more or less constantly. One of my first early “art” memories is drawing the cover for a phone book (if you can remember those!) in sixth grade for a grade-school contest. The book was a tiny little printed and stapled booklet with a rendering I made of the front of our school. Besides drawing the school itself in as much detail as I could, I also hid the initials of all my friends in the drawing. I still remember being proud of it, and unbeknownst to even me I’d just created my first piece of graphic design.

I wouldn’t actually hear the term graphic design until I was in college, but I kept drawing throughout school. There wasn’t a class notebook that didn’t get something (or rather, many things) scrawled in the margins. How I maintained a decent grade point average continues to mystify me.

Interestingly (at least for me), when I look back at those comics, cartoons and doodles I actually see graphic design in it’s obscure infancy. My illustrated superheroes always had logos or weird alien languages on them. Alien typography at age 14, who knew? I would often spend more time on the comic book ‘headline’ than on the drawing itself and my cars (or robots) looked ever so slightly branded. I was mildly-unconsciously obsessed with that type of detail and only realized later in college that there was a connection.

If you could organize an event—dinner, show, party, barn raising—with five artists, who would they be and what would happen?
Great question. One would be a local upstate New York artist named Earl. He passed a few years back, but I have a few of his pieces and would like to see him again. Is it a cop-out to say Banksy? Banksy. Basquiat. Tibor Kalman. Joe Strummer. Let’s make the event something that’s a bit of an equalizer. I live in a little river town off the Hudson, but have been biking a few miles out of my town recently through some beautiful farmland. So, the event will be a group bike ride in September, late afternoon, followed by a beer-picnic-combination at a shooting range with at a great lookout point a few miles west of here. Done! 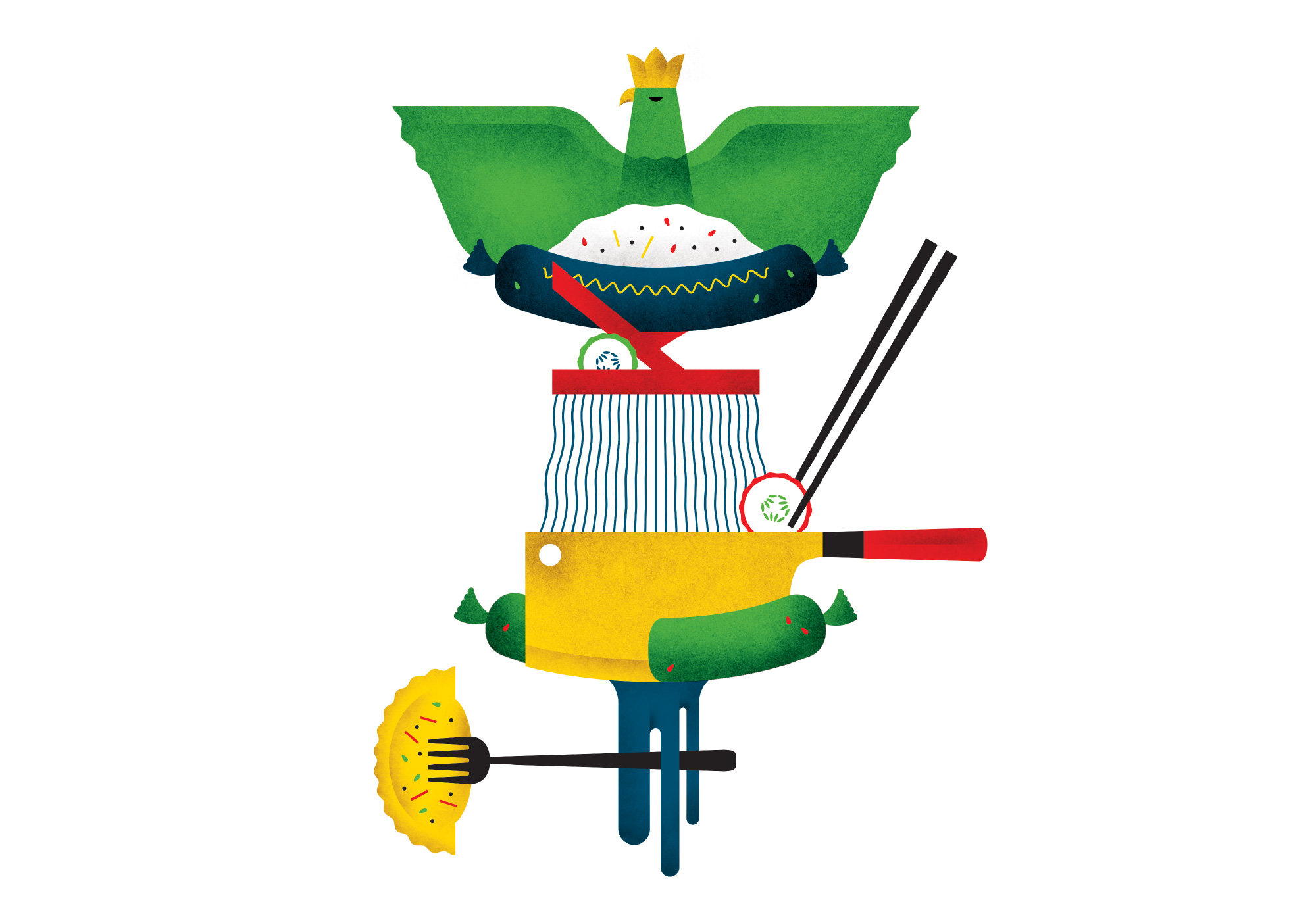 My defining moment in the process would be the time between receiving (or creating) a brief and delivering the initial ideas. It’s the period of play, as mentioned above. It’s when my artboard, desktop (and desk) are at their messiest, when I can see the potential, but haven’t quite figured it out yet. Not only is that the most fun and satisfying in that moment, but it’s kinda all downhill from there for me. That’s my high point in the process, the rest of it typically feels a bit more like “work.”
When you think about your work, what emotion are you looking for? Are there certain ideas that you hope shine in every piece?
Surprise—at a small or big scale. I hope each project, brand, poster and piece of art is disarming in its own way. 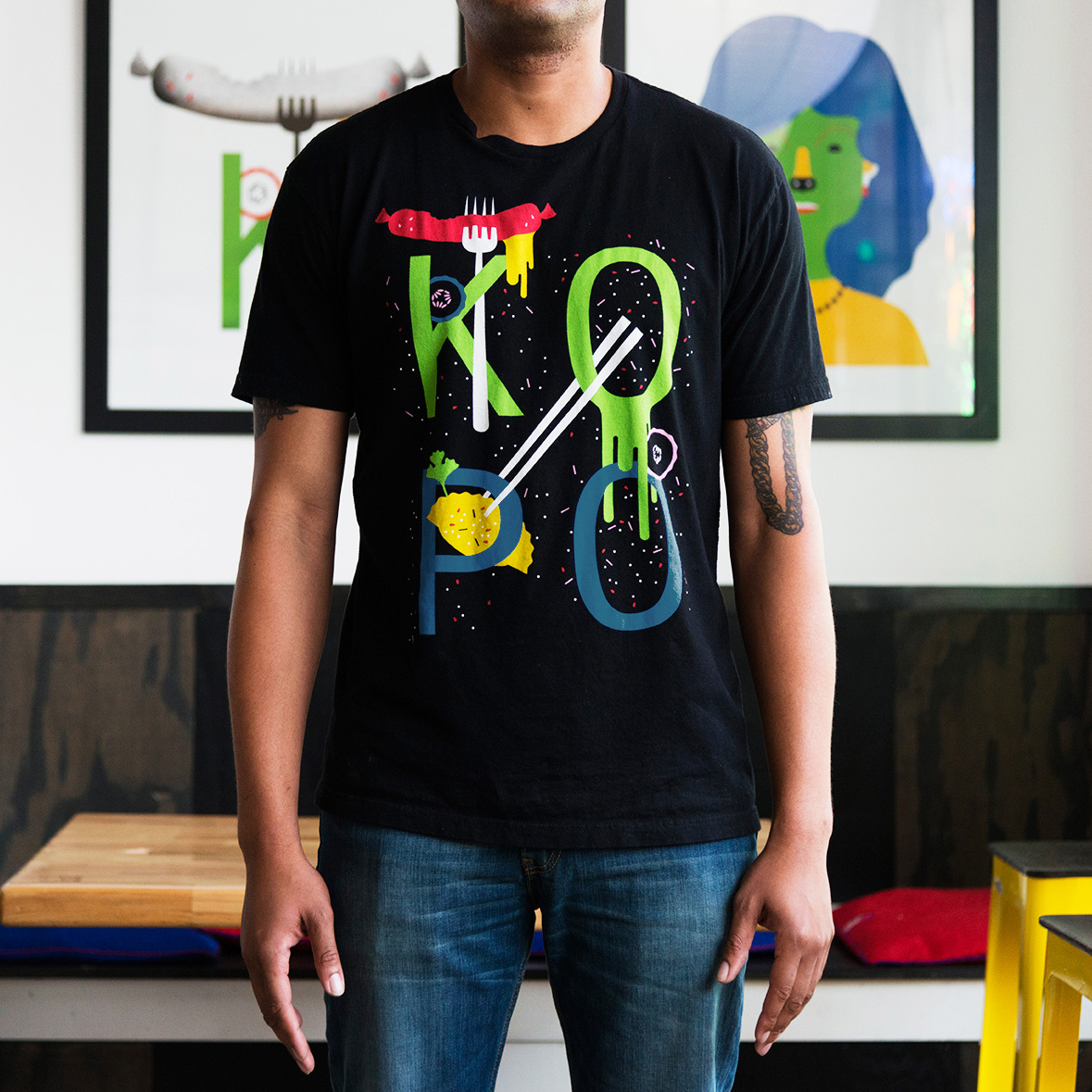 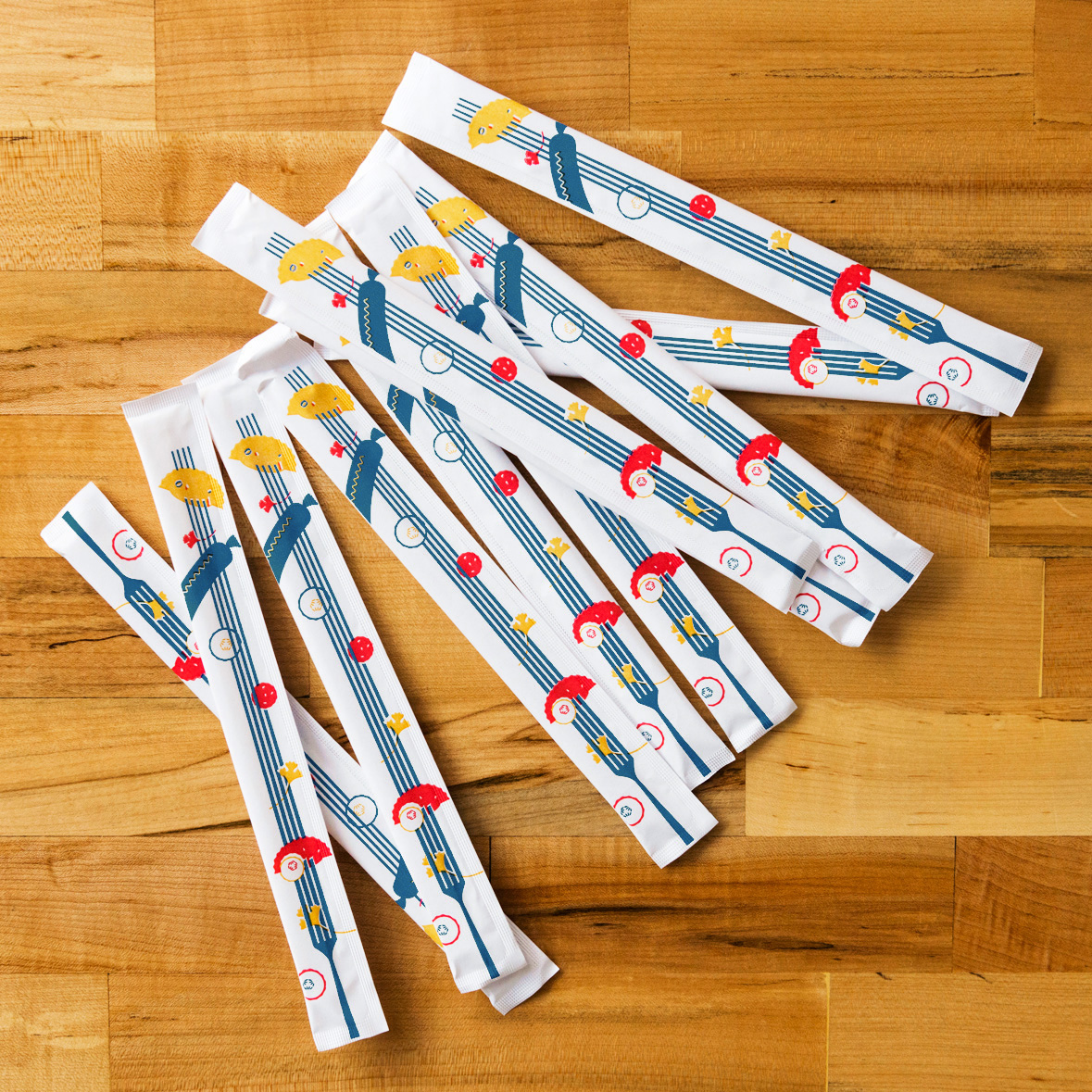 Who are your favorite people to work with and why? Is there a way of working that attracts you to them? What’s their vibe?
I love having a shorthand with fellow creatives. Some of my favorite people are those who I’ve worked with in the past where we intuitively understand each other’s perspectives, even if they aren’t the same. A long-time collaborator is one of our Design Directors at Franklyn, Elisa Maezono.

My other favorite people are clients that expressly ask to be pushed, challenged, and surprised—those who are looking for novelty, experimentation and something different. A few of those clients have turned into friends and long-term collaborators. A shout out and a sloppy kiss to Ed Marszewski at Marz Brewing and David Mikula at Oscar Health, who actually should meet each other one of these days.

If I had to sum up each of their vibes it would collectively be… “Why not?” Anything is possible with people like that.

My defining moment in the process would be the time between receiving (or creating) a brief and delivering the initial ideas. It’s the period of play, as mentioned above. It’s when my artboard, desktop (and desk) are at their messiest, when I can see the potential, but haven’t quite figured it out yet. Not only is that the most fun and satisfying in that moment, but it’s kinda all downhill from there for me. That’s my high point in the process, the rest of it typically feels a bit more like “work.” 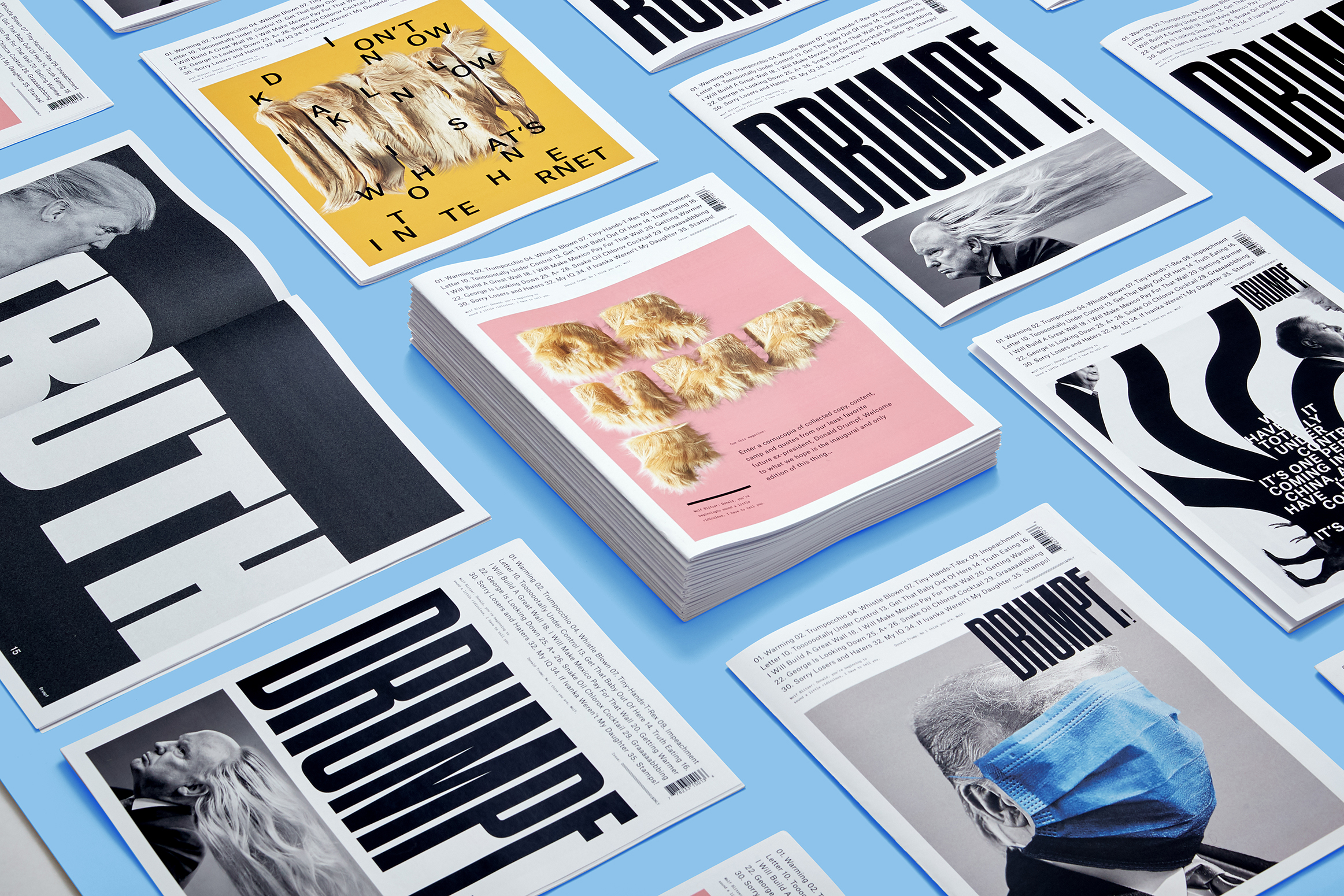 When you create artwork for a brand, what are you trying to achieve? What do you need to know? What should a brand avoid when they work with you?
I’m trying to find the balance between appropriateness and novelty. Crafting something that solves the business challenges, but that is different, unexpected and new for them, their industry and hopefully, for myself as well. We’re also taking the client along for that discovery and ride and hopefully have them enjoy the process along the way.

We need to know as much as we can about the business and personal goals of the people we’re working with. The more we can get into their collective heads (while still keeping an outsider’s perspective) the better. In terms of things I’d like to see less of, I’d cite over-rationalized decision-making and not staying open to the idea of taking a creative leap, if we don’t take risks it’s hard to move anything forward at any level. Finally, I’d simply encourage clients to keep a hold of their emotional, intuitive responses to the work as well as the more practical considerations.
What brands, in your opinion, use art to elevate their meaning and importance in our lives? Is there an example that stands out in your mind?
—Kenzo
—Alexander McQueen
—Theatre National de Bretagne
—Bjork

If you could work with any brand, which brand would you choose? What would you do with them? What does the dream outcome look like?
I really struggled with this question because it ultimately felt like I’d be giving a very commercial and slightly icky answer… So, I’m going to flip this one around a little bit, if you don’t mind.

I really enjoy working with one of our existing, long time clients—the Marz Community Brewing Company. They provide the engine for an incredible range of non-profit, experimental, arts, culture, food and product brands in Chicago, and though they are rad and already winning, I would love to be able to put more energy towards them. In an ideal world, I’d like to help them build the brand architecture, the branding and (with a healthy amount of grant money) the physical spaces necessary to help them further their mission of being a deeply empowering engine of social and societal progress.

What does that look like? I’m not sure, honestly. Perhaps, we start a university or a College of Marz to disseminate to the next generation everything the amazing people there have learned over the last 30 or so years. Let’s go with that!
What’s your dream collaboration with a brand of your choosing? Who does it involve? Where is it unveiled? Why does it exist?
Rural Studio. I’d love to play some part in their process, literally participate in it. If there’s a branded component that’s lovely, but I’d just as soon build a house with them.
Q&A
Allison Filice
Annica Lydenberg
Greg Kletsel
Michael Freimuth
Yi Pan